Regaining a lost love for beauty and simplicity. 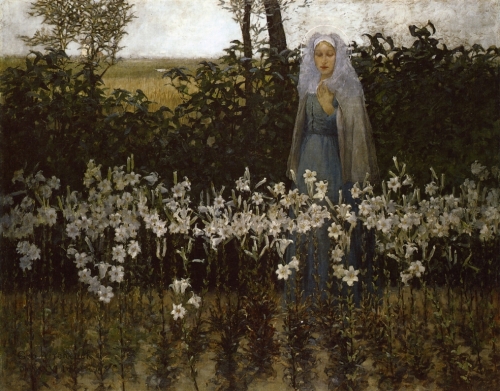 On a recent visit to the Art Institute of Chicago I saw this beautiful Annunciation by George Hitchcock.  During an often hectic Advent season, this painting has encouraged me to calm my soul and stand in awe before the lovely and humble coming of Christ.

‘Therefore the Lord Himself will give you a sign: Behold, the virgin shall conceive and bear a Son, and shall call His name Immanuel.’     – Isaiah 7:14

‘Now in the sixth month the angel Gabriel was sent by God to a city of Galilee named Nazareth, to a virgin betrothed to a man whose name was Joseph, of the house of David. The virgin’s name was Mary.  And having come in, the angel said to her, “Rejoice, highly favored one, the Lord is with you; blessed are you among women!” But when she saw him, she was troubled at his saying, and considered what manner of greeting this was.  Then the angel said to her, “Do not be afraid, Mary, for you have found favor with God.  And behold, you will conceive in your womb and bring forth a Son, and shall call His name Jesus.  He will be great, and will be called the Son of the Highest; and the Lord God will give Him the throne of His father David.  And He will reign over the house of Jacob forever, and of His kingdom there will be no end.”  Then Mary said to the angel, “How can this be, since I do not know a man?” And the angel answered and said to her, “The Holy Spirit will come upon you, and the power of the Highest will overshadow you; therefore, also, that Holy One who is to be born will be called the Son of God.  Now indeed, Elizabeth your relative has also conceived a son in her old age; and this is now the sixth month for her who was called barren.  For with God nothing will be impossible.”  Then Mary said, “Behold the maidservant of the Lord! Let it be to me according to your word.” And the angel departed from her.’     – Luke 1:26-38